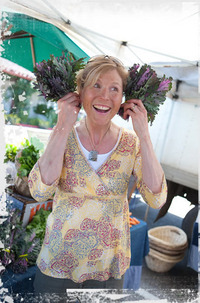 SUSIE SUTPHIN
On June 1, 2011, I embarked upon a quest to become better acquainted with our food system. I was joining the legion of others who were doing their part to create a healthier and more resilient food economy. I had quit my job and rented my house in order to get into the fields and into the barns to learn as much as I can about our food production. I crafted a self-prescribed education program where I worked on farms, took courses, read books and interviewed farmers and sustainability experts. At the end of six months, I returned home to North Lake Tahoe, CA to help my mountain community become more focused on its food security and implement strategies to build a regional food system. With the help of many people, businesses, farmers and organizations, we are launching the non-profit, Tahoe Food Hub. Opening fall/winter 2013!

The Back Story...
On May 9, 2008, I read an article on Grist.org. It was an interview with Timothy LaSalle, Rodale Institute’s Executive Director at the time. His premise was, ‘”farmers should be recognized as potential climate change heroes.” I went on to learn about regenerative farming, mychorrhiza fungi and how conventional farming is counter intuitive to soil’s natural ability to sequester carbon. It was such a simple concept. I said to myself, “How could we get more farmers farming this way?”

Most recently, I have worked for the Wild & Scenic Film Festival which is the largest environmental film festival in the US. At our January 2010 festival in Nevada City, CA, our theme was agriculture. Throughout 2009, we were flooded with amazing stories of what was happening across the country in the food movement. We screened, Food Inc., FRESH, What’s Organic About Organic, Dirt, Food Fight, Polycultures, Homegrown, Greenhorns, and Soil in Good Heart to name a few. I already ate organic, belonged to a CSA, composted, grew my own vegetables and had a pretty good understanding for what was wrong in our food system (such as reading articles like the one about soil integrity). But it wasn’t until that film season when I started to make all the connections. It affected me profoundly and I knew I wanted to start steering my career path in that direction. I feel like I could write a book, or at least a long essay, after all the notes I’ve taken in watching over 30+ ag films and reading subsequent books and articles.

I worked for Wild & Scenic for over five years managing the touring program which had 12 venues when I started and grew to over 110 venues since 2006. The tour works with local grassroots organizations who host the festival as a way to outreach into their community. What better way to increase the groundswell for the environmental movement than to invigorate the capacity of local enviro groups with new activists! After watching over 250 films every year for five years, it was not enough anymore to just inspire others. I too am inspired and want to get my hands dirty, literally. Out of all the issues we feature in our films, food and agriculture is the one that has resonated with me the most. I think the April 2009 issue of Mother Jones said it best, “Want to Fix the Country? Fix the Food!”

And that’s where my story began...pursuing a career in "sustainable food systems." I am thankful that my foodlust curiosity has brought me back to Tahoe and connected me with the fabulous people who share my passion namely my co-founders of the Tahoe Food Hub, Eve McEneaney and Bill Kelly. Through the efforts of the Tahoe Food Hub, we will explore opportunities which will have a social, economic and environmental benefit on the producers, people and communities in our greater foodshed.